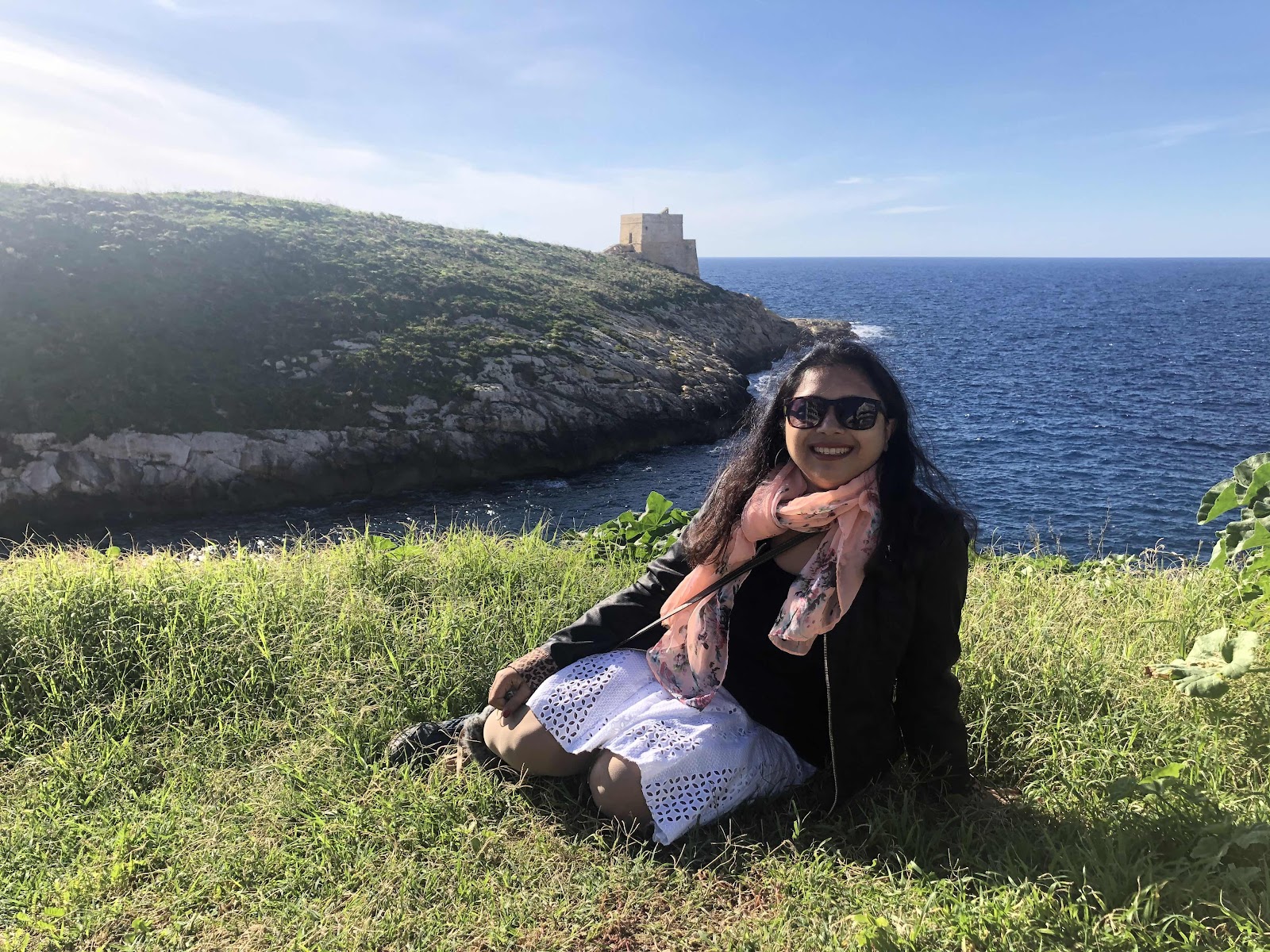 Malta is a tiny island country located amidst the Mediterranean sea. It is just 93 kms(58 miles) from Sicily (Italy) and around 300 kms (186 miles) from the North African coast. Though it is such a small country (in terms of area), its historical significance is tremendous. Strangely, Malta has monuments dated as back as the neolithic era(last of the stone age). This implies that human civilization had prevailed in Malta from the earliest times! Malta had witnessed foreign invasions from centuries by various rulers like Romans, Greeks, Arabs, Normans, French and the British. Due to such a rich history and influence of various cultures, I was particularly keen to visit this tiny piece of land called Malta!
Countries like Malta are not so touristy as compared to the rest of Europe. Hence, getting accurate information to plan a trip is little difficult (at least as on 2019). The best part about Malta is that it is covered by Schengen Visa. So, I had clubbed a 3 day Malta trip along with visiting other 2 countries in Europe. Anyone who is doing a Euro trip and wishes to travel to some offbeat location can easily include this gem of a country.
Malta is under European Union and well connected by flights. It consists of 3 Islands- Malta, Gozo and Comino. Its capital is Valletta, located in Malta Island. English and Maltese are the official languages.

Climate: Malta is relatively hot as compared to the rest of Europe. We traveled during last week of November and climate was awesome! A light jacket was all that was needed and mornings you can even do without it.  Malta usually has a Mediterranean climate, with mild wet winters and hot, dry summers. The average temperature is around 23 ⁰C in day time and 16 ⁰C during night.
Time Difference: India is 3 hours and 30 minutes ahead of Malta.
Currency and exchange rates:
The official currency of Malta is Euro. 1 Euro is approximately equal to 70 Indian Rupees as of 2019 dec.
When to Visit Malta:
Malta has tourists all through the year but peak travel season is summer (between April and July). But I will still stick to travel here during winter. There are three reasons- 1. The crowd is less during winters  2. The climate is very pleasant during winters 3. The prices are very low during off season!

Getting to Malta:
We traveled from Rome and reached Malta. Malta has only 1 Airport. It is well connected with flights from all over the world.  Airlines  flying to Malta are Emirates, British Airways, KLM, Lufthansa, Air France, Aeroflot and Turkish Airlines. India does not have direct flight to Malta. But there are lots of options via important cities of Europe. Prices to and fro Malta from India are more or less same as of other European cities like Paris or Rome.

Where to Stay in Malta:
Among the three Islands, according to me it is best to stay anywhere on Valletta. Valletta itself is a big place and there are lots of hotels around. One can book easily from any of the online hotel booking platforms. We stayed in Westin Dragonara Resort, located in San Giljan (Pronounced as Saint Julian). If you are going for a more relaxed vacation, you can take up a homestay in Gozo.

Reaching Hotel from Airport : Make your way for the Express Bus Bays after landing  at Malta Airport. The bay area is just across the Departure Hall of the airport, barely 350 mts. Take note that there are  FOUR express bus service routes- X1, X2, X3, and X4. Each bus route has a dedicated bay.The X4 Bus goes to Valletta. In fact, Valletta is its first stop.  The ride from Malta International Airport to Valletta is less than 20 minutes, if traffic is not too heavy.
Adult single journey ticket rates:

From Bus stop we tool Bus to San Giljan as our  resort  was located there. Bus journey was comfortable and we had a first hand view of the urban Malta from the bus window. From our bus stop, a 500 m walk took us to Westin Dragonara Resort.

Transportation inside the islands: Malta has an extensive bus network, connecting all the major places. The services are regular, but delays are known to occur especially during day time mostly due to traffic jam(just like India!). The prices are very nominal for bus rides (prices mentioned on the previous section). Malta also has a number of Hop-on-Hop-off  colourful  buses, meant specifically for tourists.
You can also hire a taxi or rent a car, and go exploring the countryside at your leisure. This is a perfect way (though expensive) to discover many hidden or not-often-visited curiosities in Malta.

Day 1:
We reached Malta International Airport at noon 12:00. After picking up luggage  we took X4 bus to our resort. We reached hotel around 1:15. After freshening up, headed to a nearby restaurant  called ”TheBlackBull Pub”for lunch. The food was really awesome and we became regulars at this place.
Post lunch we  roamed inside the hotel premises and enjoyed the sea view.
At evening we took a bus to Valletta and walked around the streets near the waterfront. We took pictures at the Saint John’s Cathedral. The streets of Valletta had beautifully decked up for Christmas month. It was looking like the Christmas celebrations had already begun with people singing and performing on the streets and lovely decor of tge streets.
Reached back hotel late around 9:30 pm. 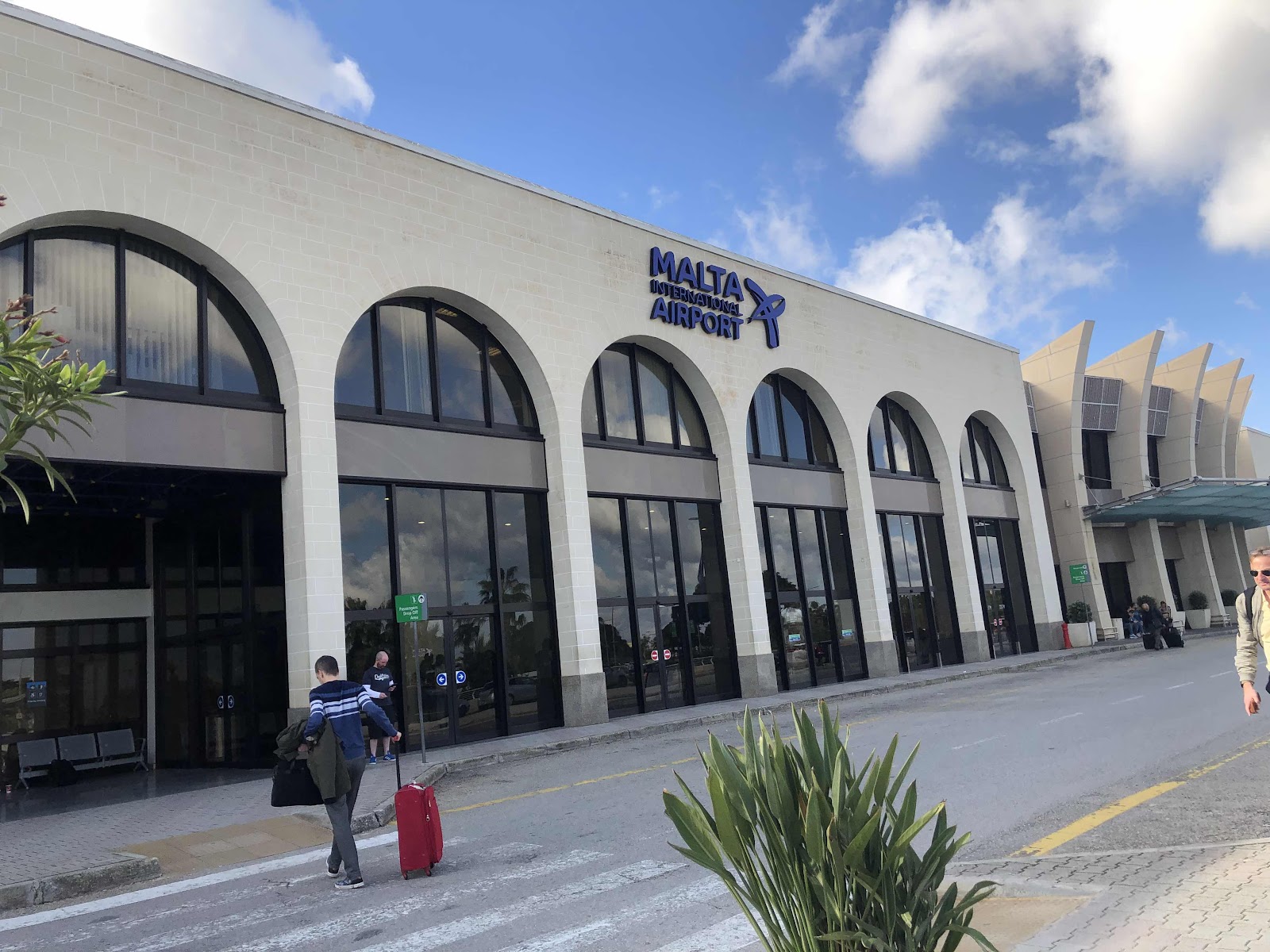 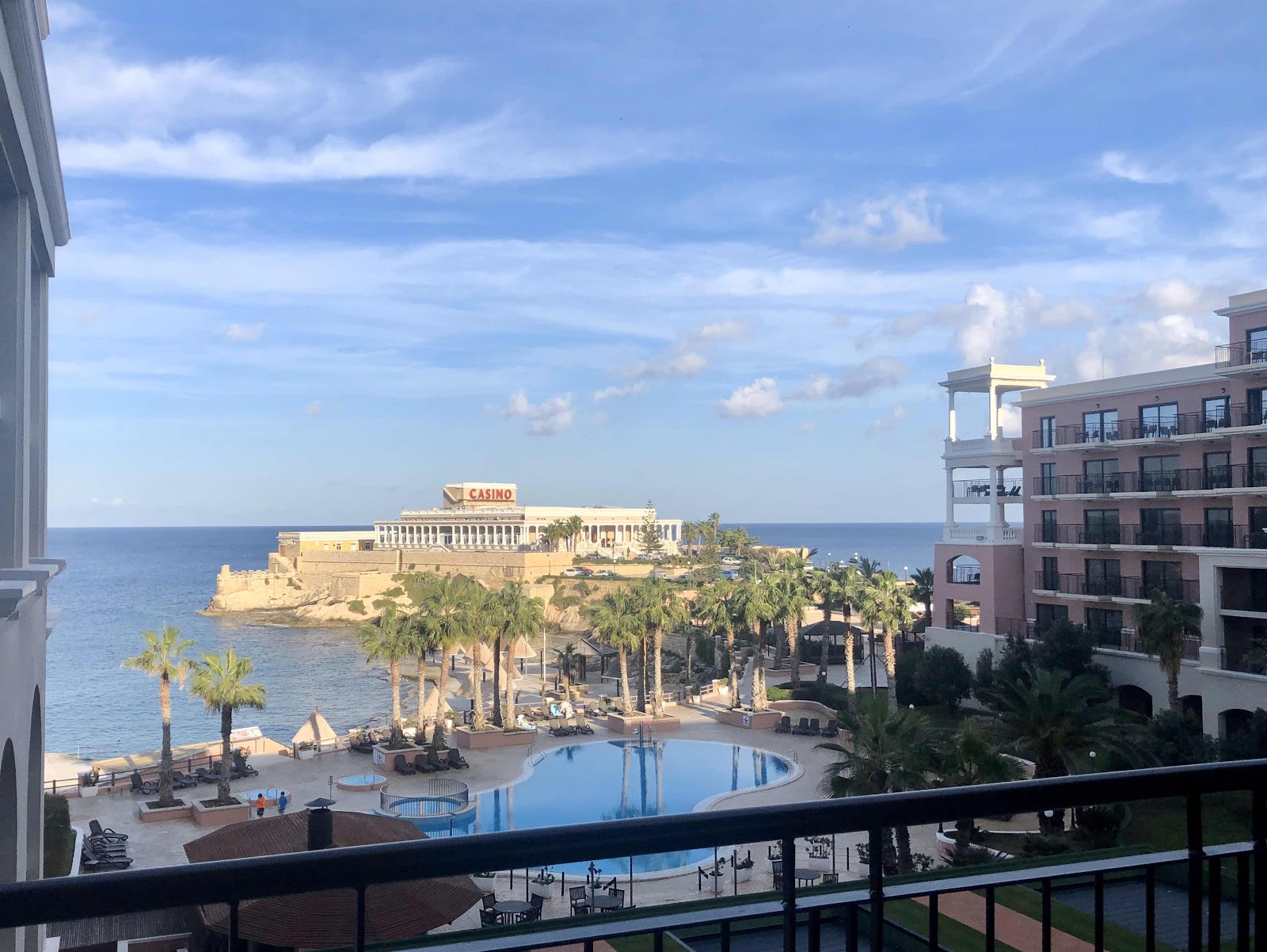 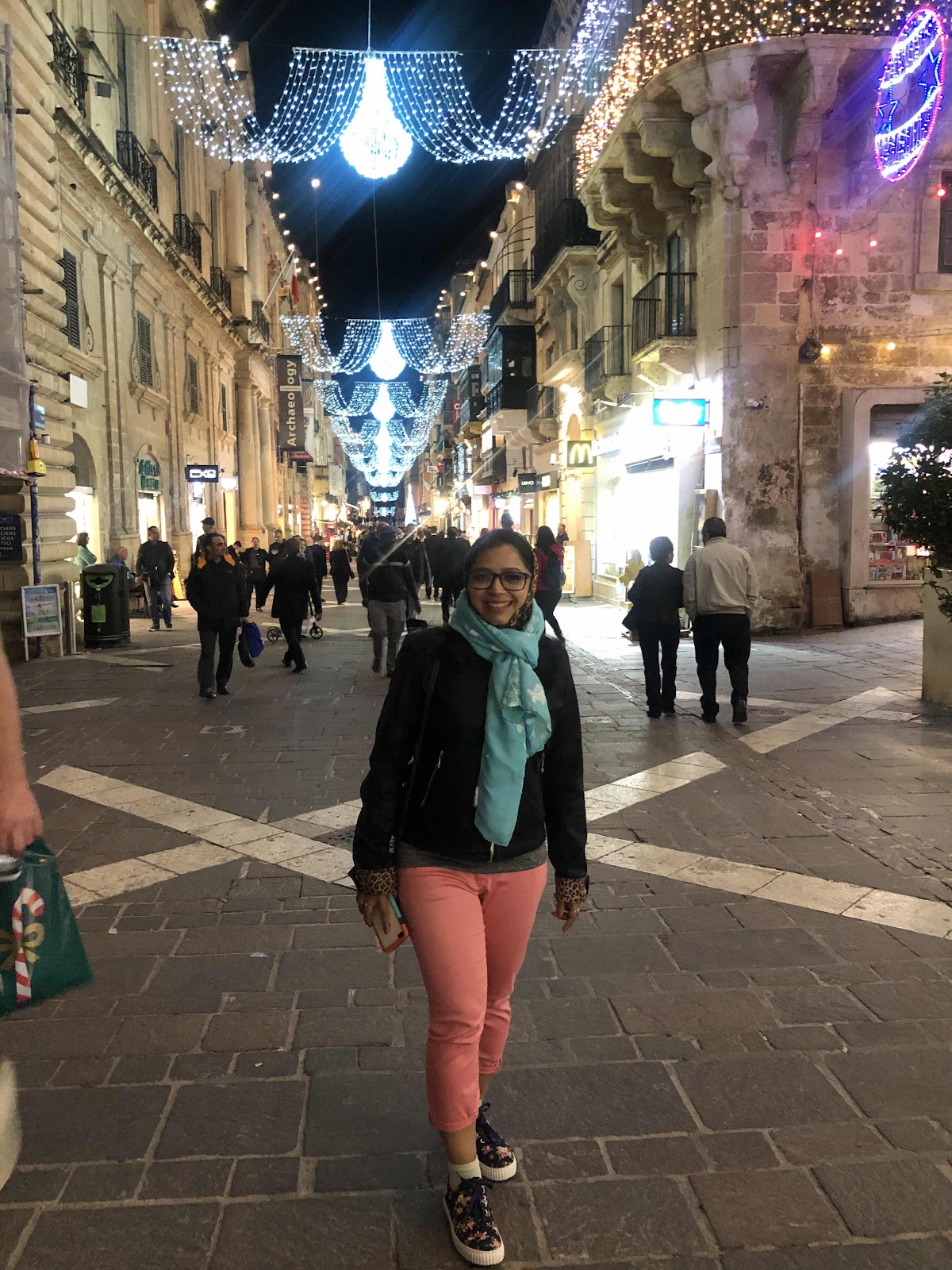 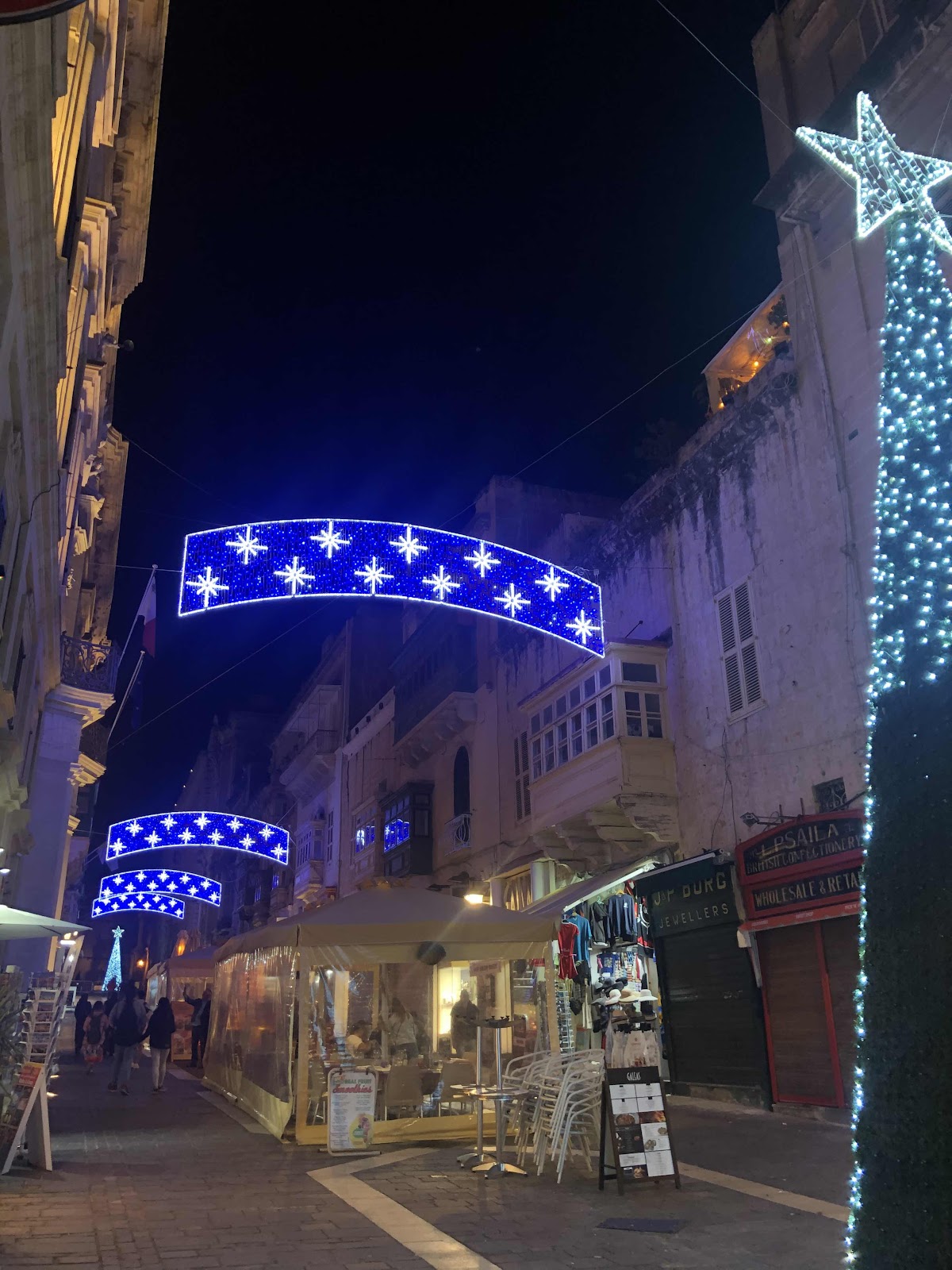 Day 2:
Today was the longest day for us as we had booked Gozo Island Tour for the whole day.
Ours was a full day Jeep tour and was priced at Rs 5600 per person inclusive of lunch and everything.
We had been picked from our resort at around 8:00 am. The first stop for us was the Popeye Island view. Any number of photos were not satisfactory to capture the marvellous view of the beautiful village, which is actually a film set.
Our vehicle came to a stop at the port where we were transferred to a speed boat to reach Gozo. It was quite a bumpy ride!
In Gozo we met our tour guide who picked us in another vehicle to show us in and around the island. Our first stop in Gozo was the Ramla Bay. It had beautiful red sandy beach. When we went, there was no one in the beach except for us- perks of visiting in off season!
Next stop was the prehistoric temple- Gigantija. It took us around 30 mins to complete visiting the ruins. I have never seen something so old in my life (This relic dates back to the stone age). Gigantija had very nice restroom. So, it is a good idea to freshen up here as it was going to be a hectic day!
The next stop was for lunch. On the go we had witnessed spectacular scenery like Calypso Cave, Sannap Cliffs, Xlendi Bay, and the Inland Sea. Views were stunning and every spot called for photography.
Lunch was delicious Maltese cuisine. I loved the way they prepare chicken. Maltese food had a strong mix of french and Arabic influences.
Post lunch we were very exited to visit the next spot- Dwejra Bay. This place rose to fame on account of Game of Thrones, which was shot there. The Azzure window in Dwejra Bay is no more like it used to be. The window collapsed on 8th march 2017 unfortunately. What we see today still hold a great view with the missing arch off course! We took a boat ride in the blue lagoon through the limestone caves (stud with corals!) which was really worthwhile. I could sense how fierce the Mediterranean sea is from the ride. Next we stopped at the Citadel at Victoria. It was a huge Citadel and it took as around 45 mins to cover the same. The Citadel had the complete view of the Island of Gozo. Our last stop was the Church of St. John The Baptist. On the way we stopped a while at Marsalforn Bay, Xweijni Salt Pans. It had an awesome view with the setting sun. A must photographed stop..Our guide dropped us to the Gozo harbour around 5 pm. We returned to our hotel after 3 hours with all the break journeys in between from jeep to ferry to another vehicle. 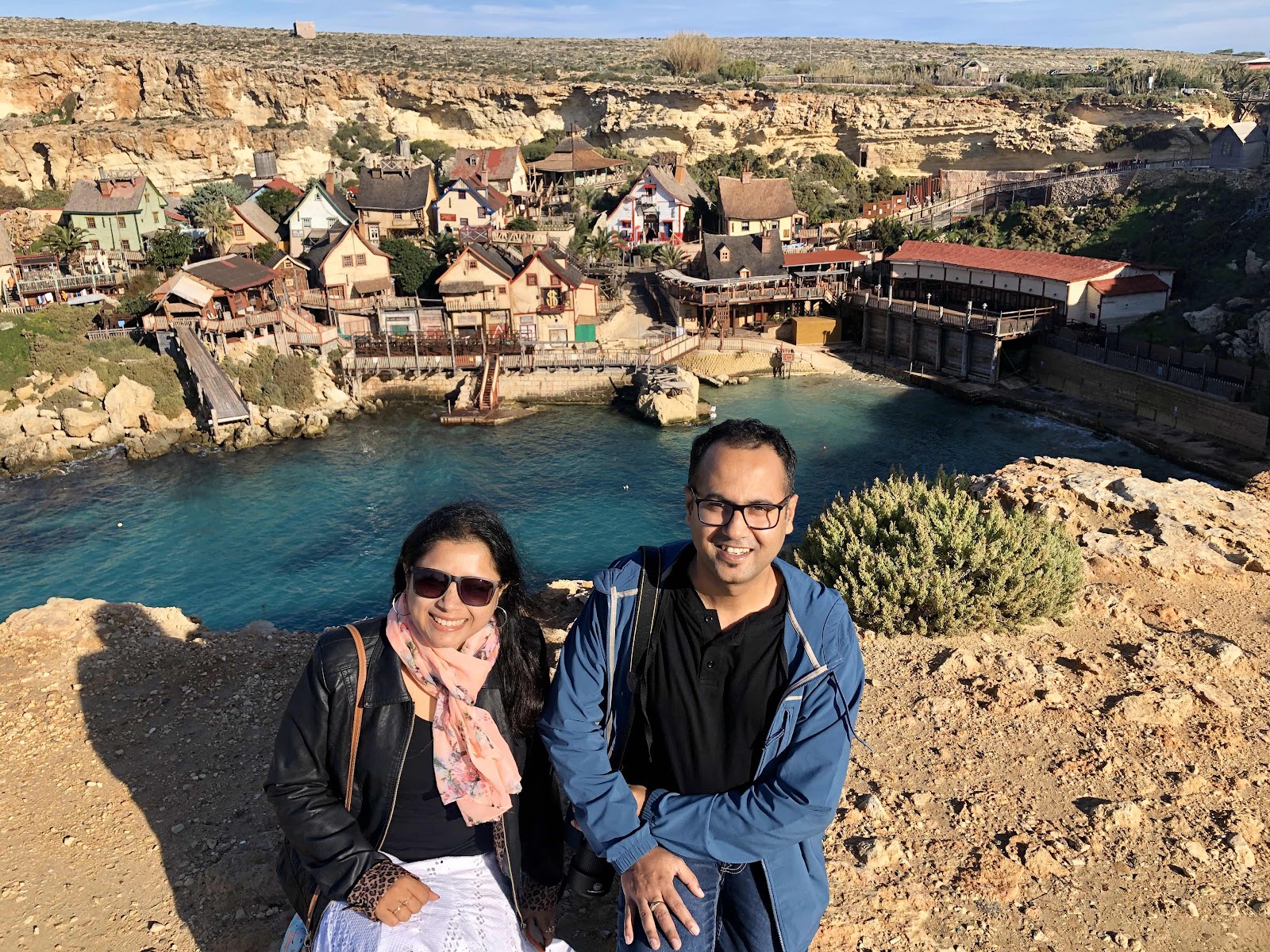 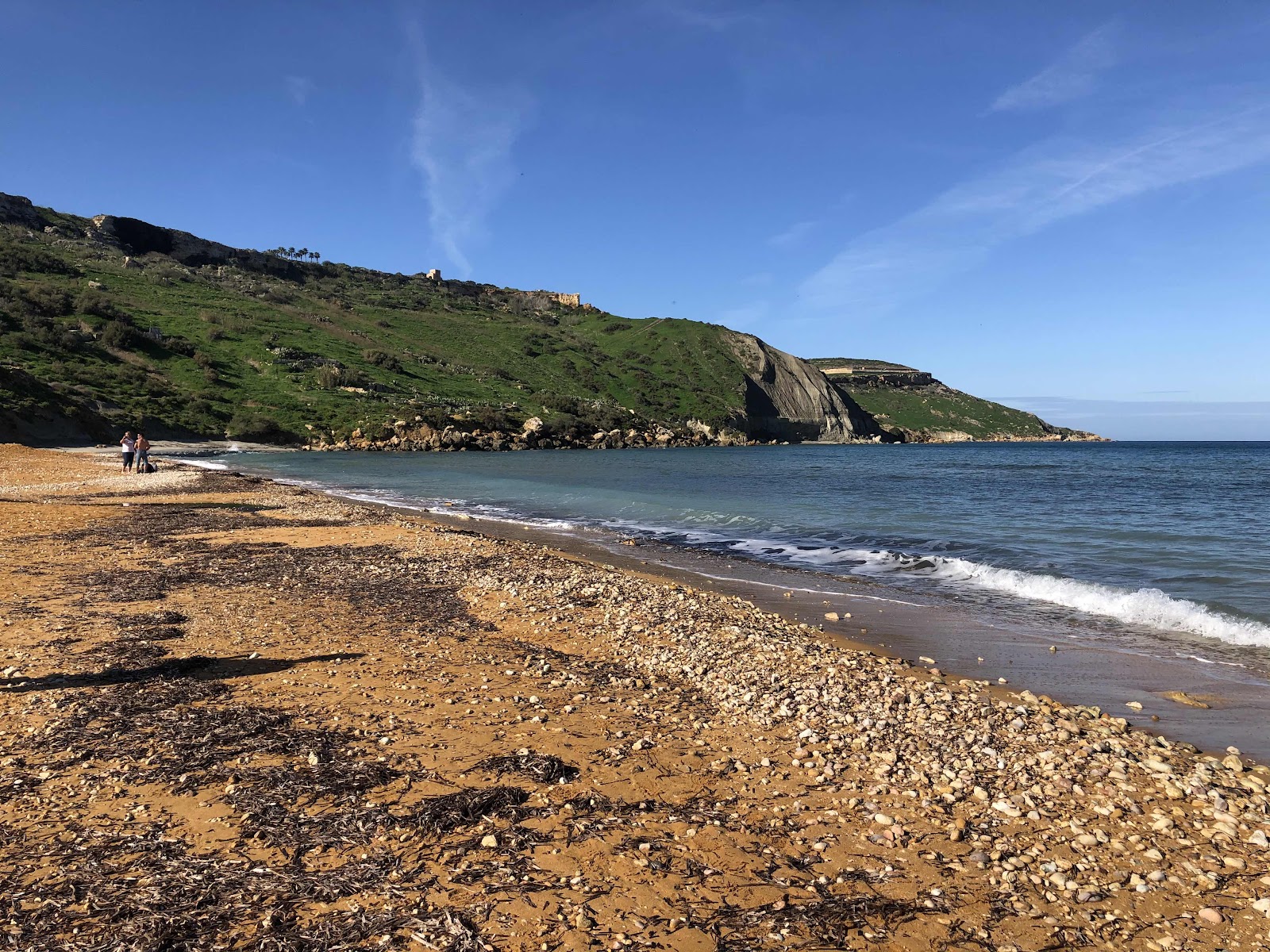 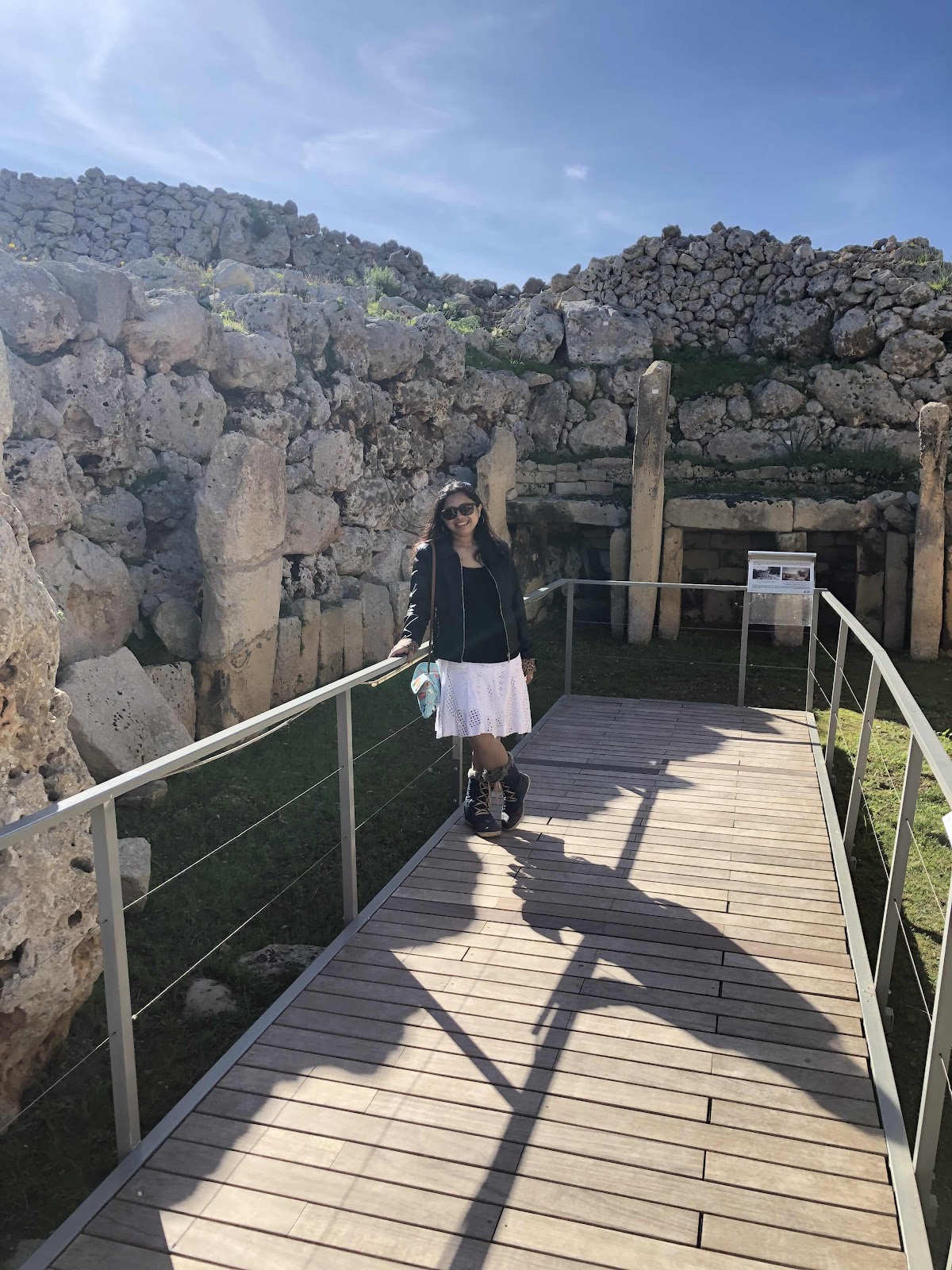 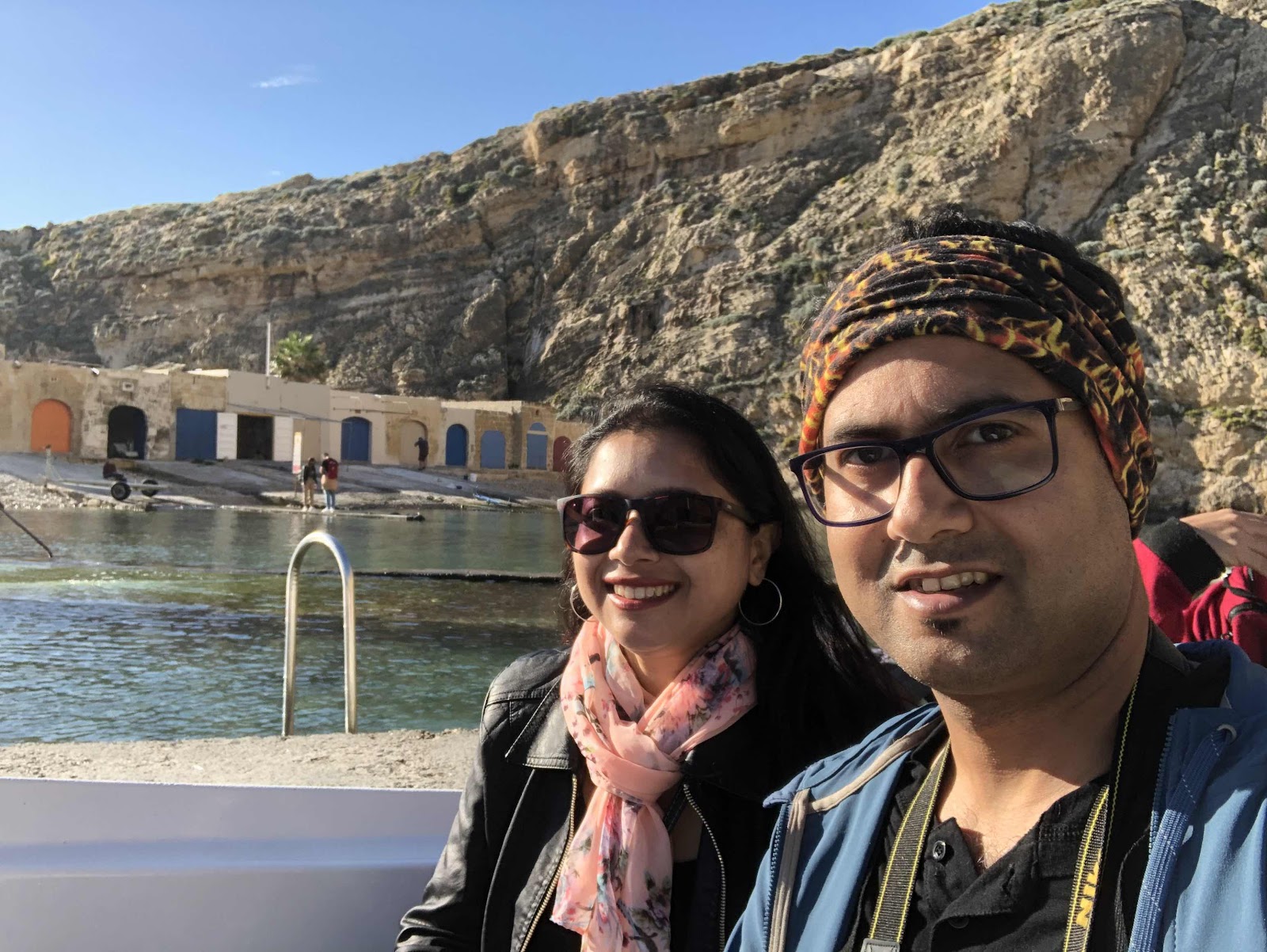 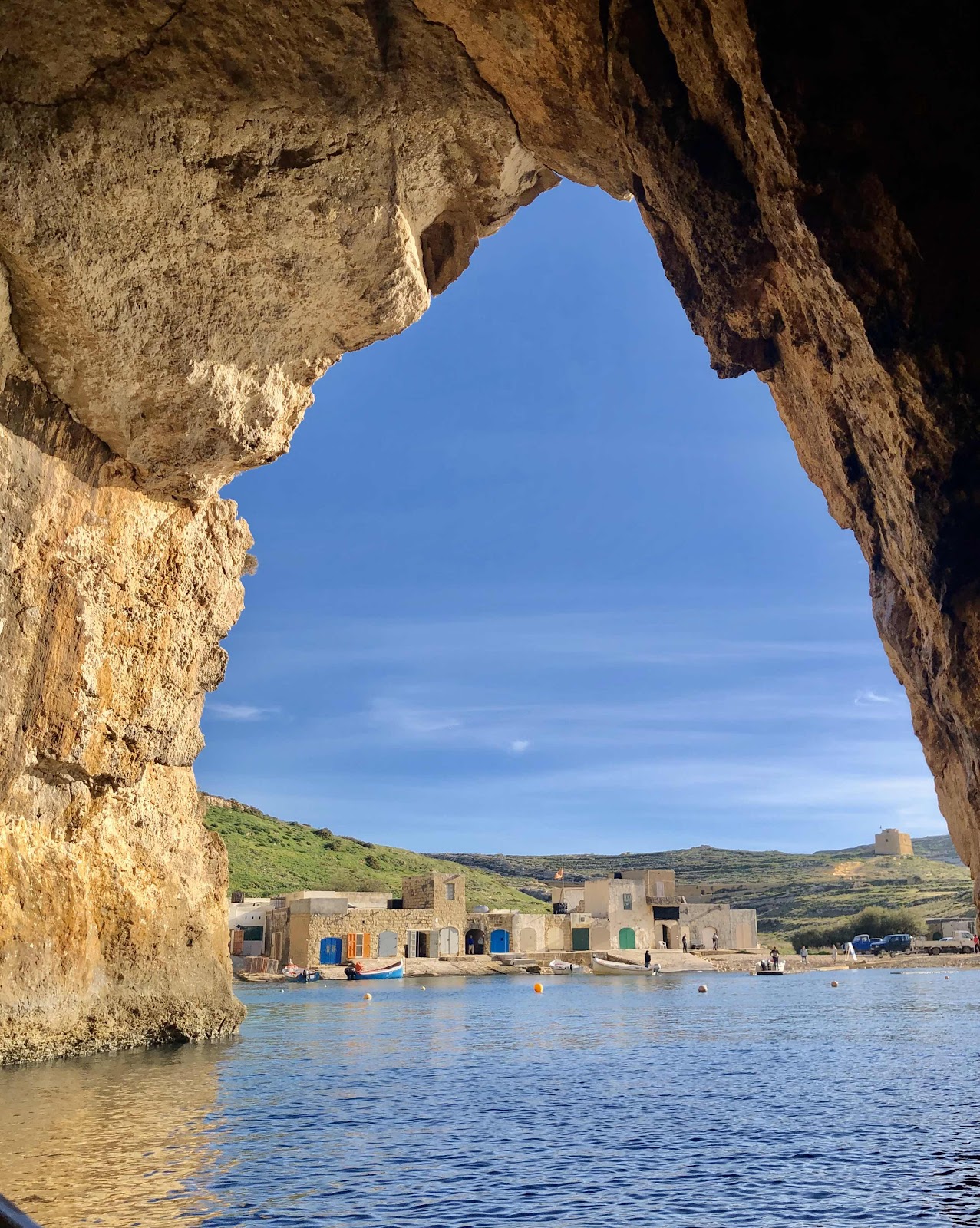 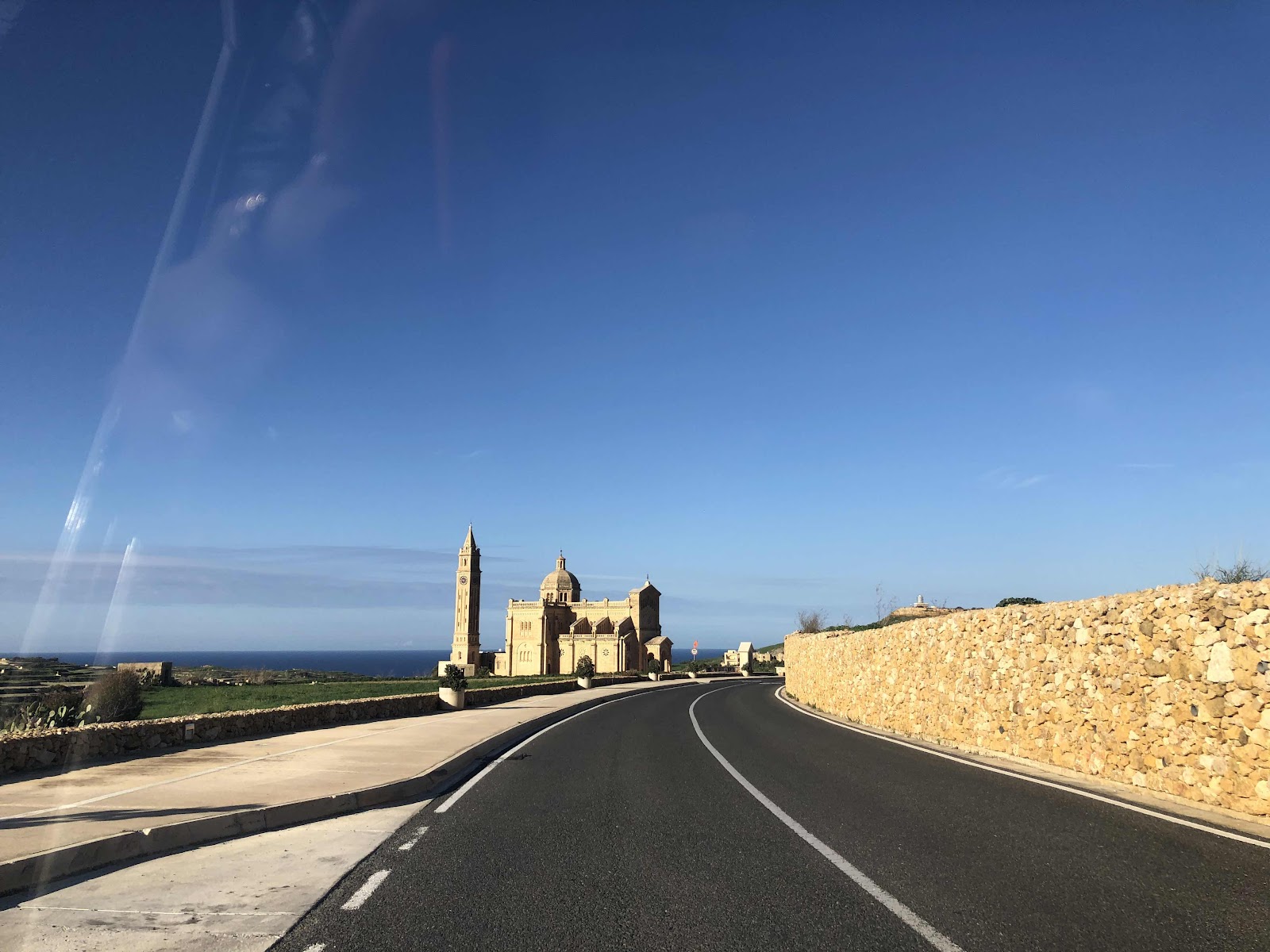 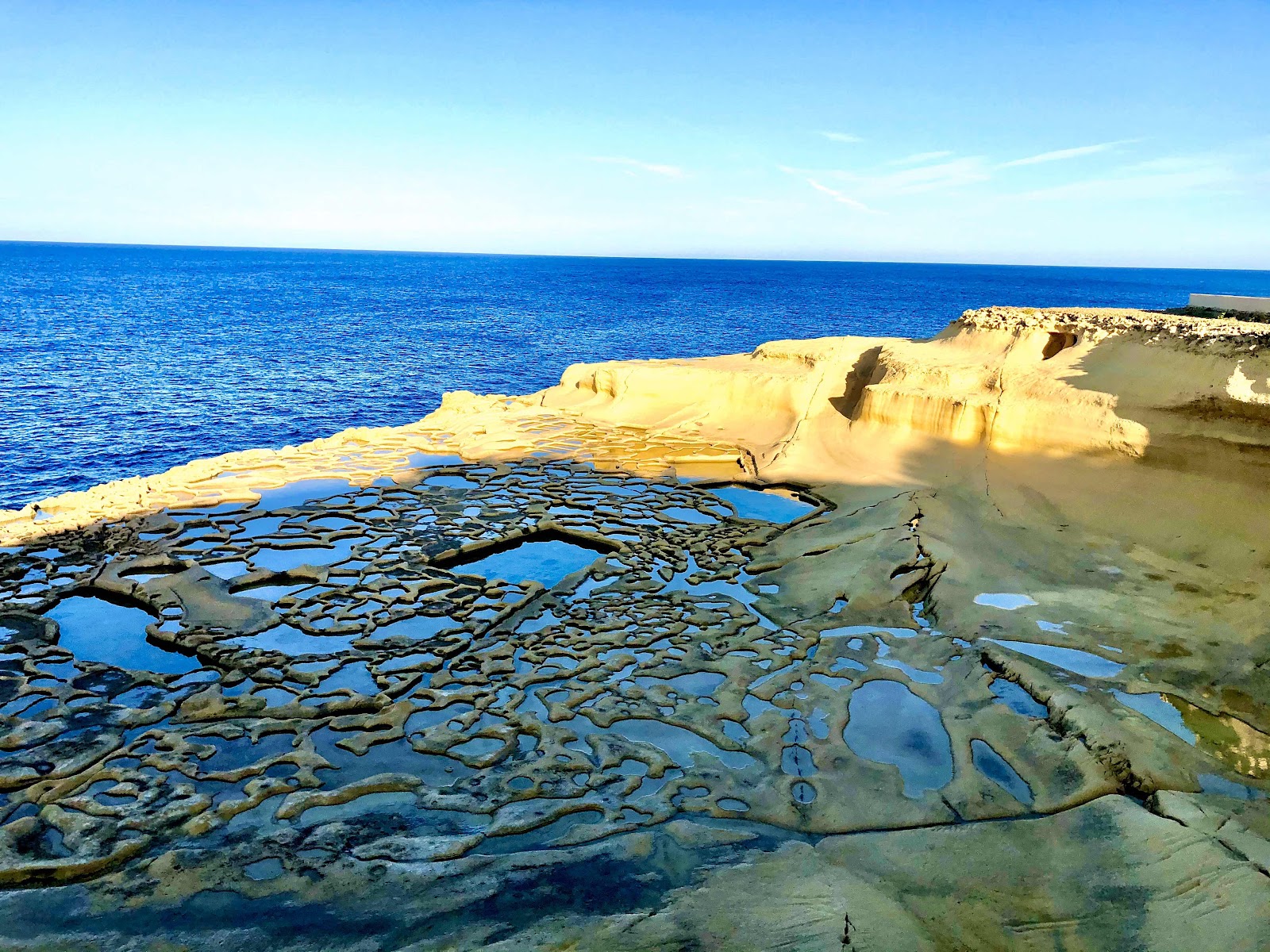 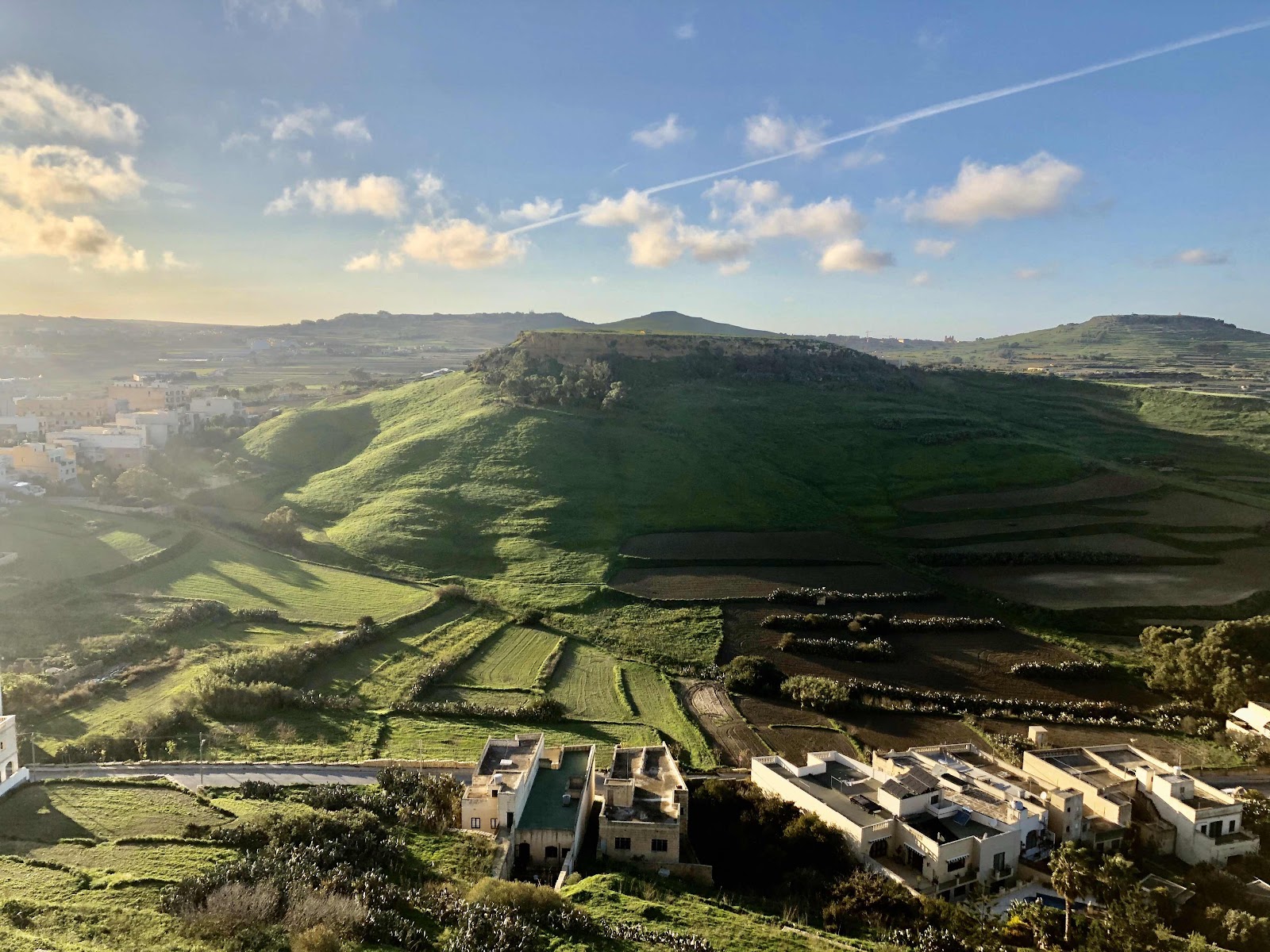 Day 3:
We had our return flight in the evening. So there was time for half day tour to cover Valletta.
We started for Valletta with the usual bus at 8:30 am and reached within 30 mins.  We did some shopping for magnets and souvenirs from the market place around the Saint John’s Cathedral. Then we walked past the upper Barakka Gardens from where the valletta coastline is visible. Took the lift from the gardens and came down to reach the Valletta waterfront. After spending some time there, returned hotel during lunch time.
Post lunch we stayed in hotel and closed the packing chores.  Took some rest before leaving the hotel. While returning  we took the same express bus to reach airport. With a heavy heart we left for our next destination which was Milan. Thus ended our trip at Malta 🙂 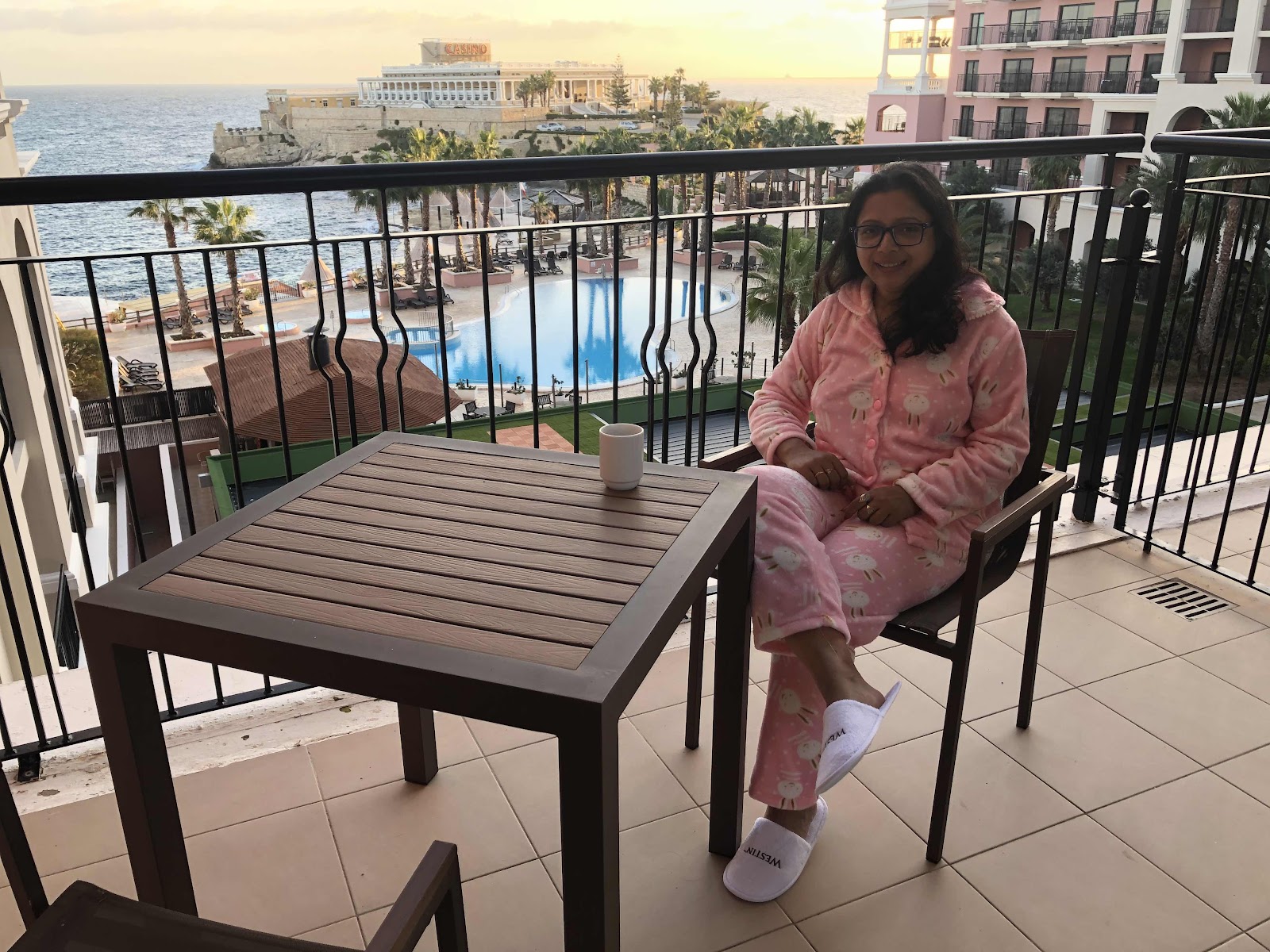 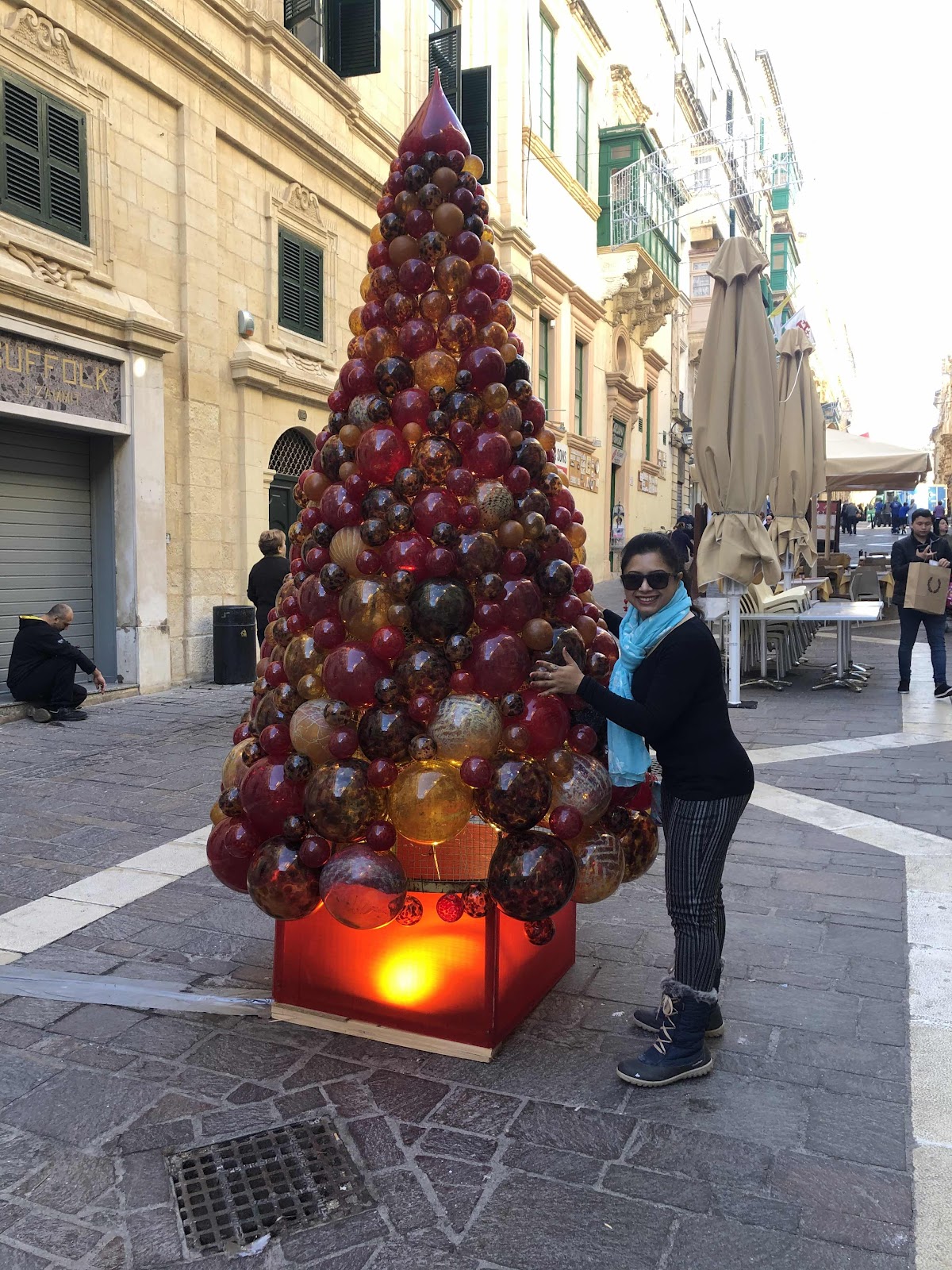 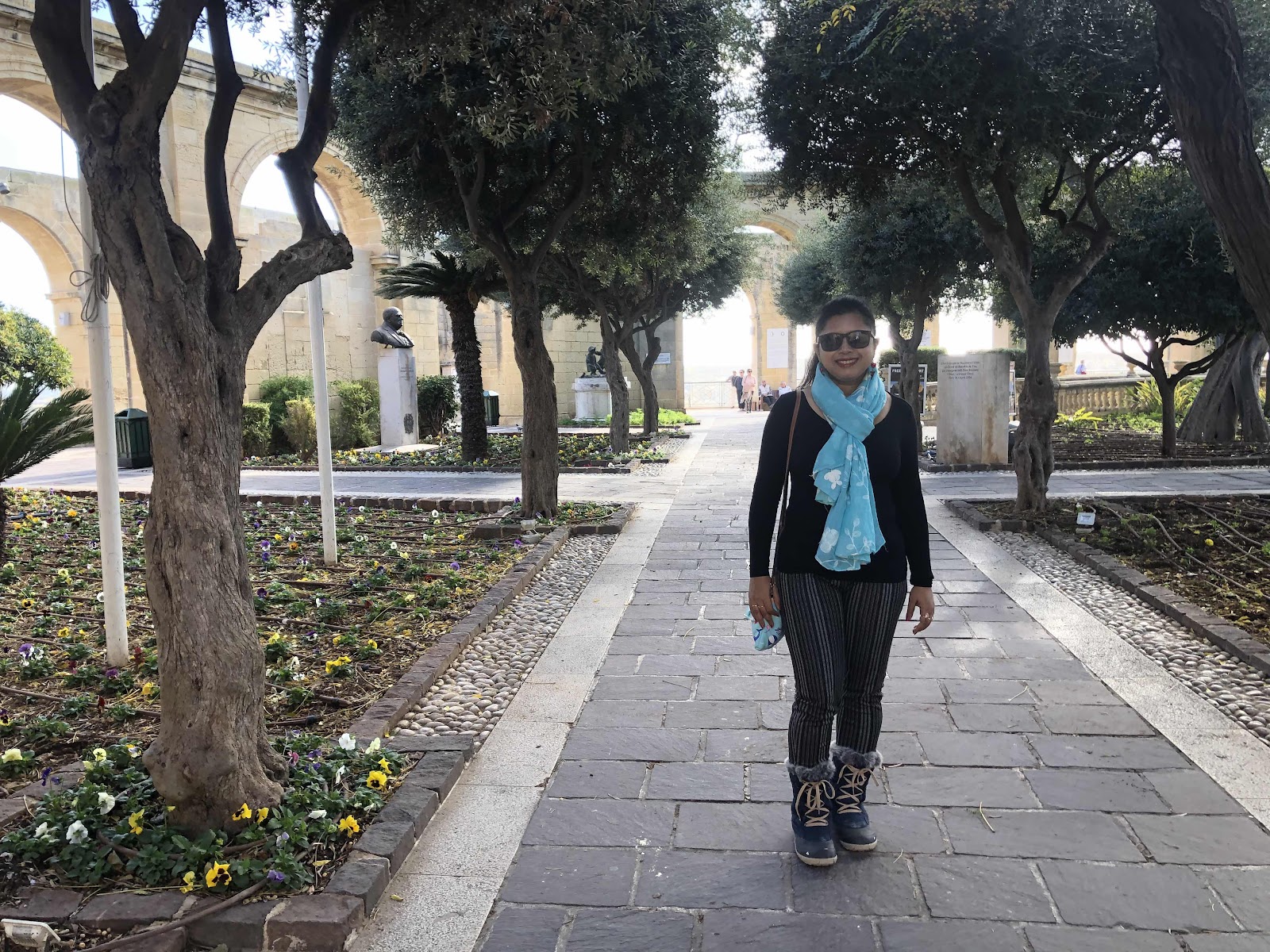 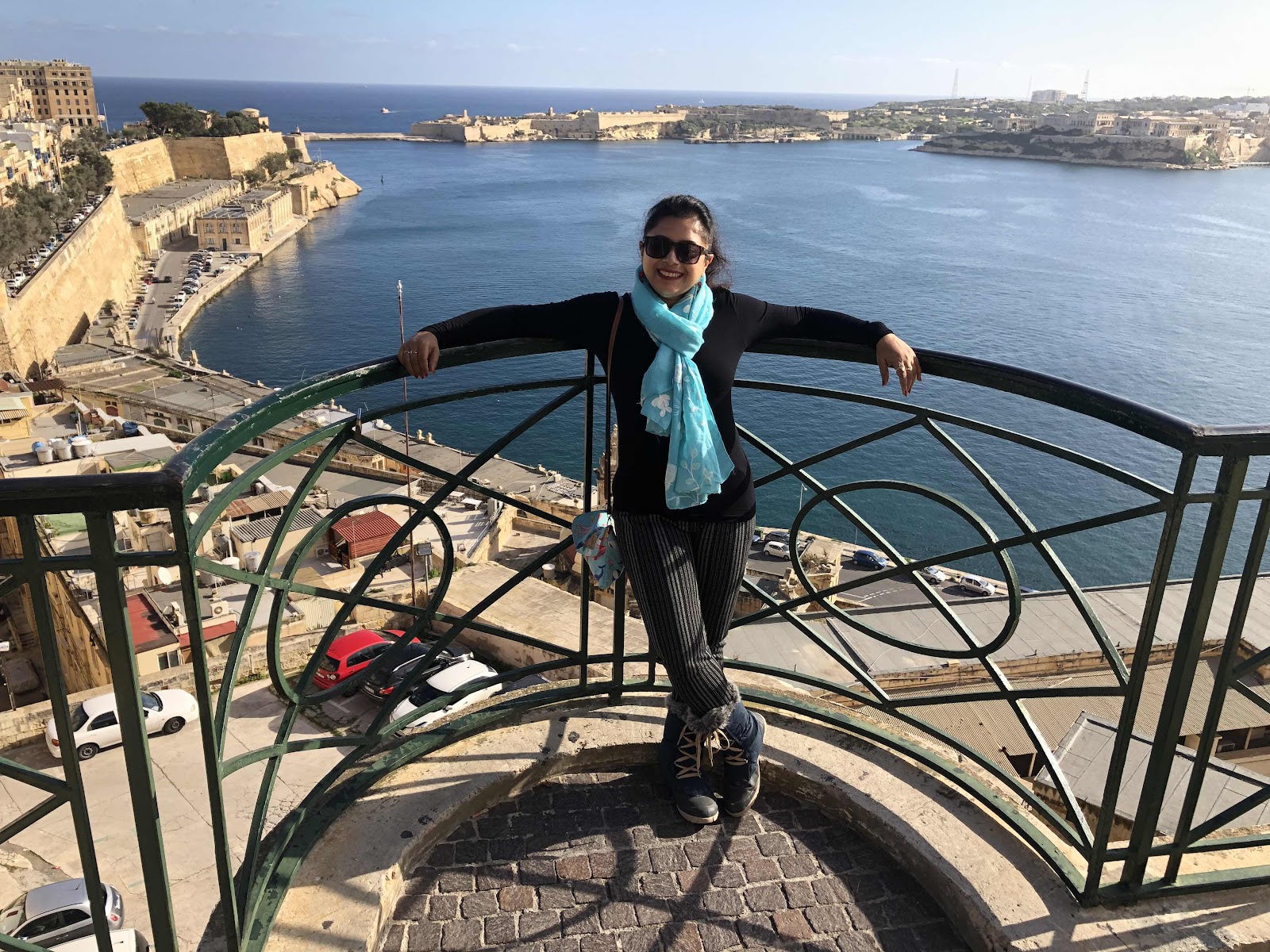 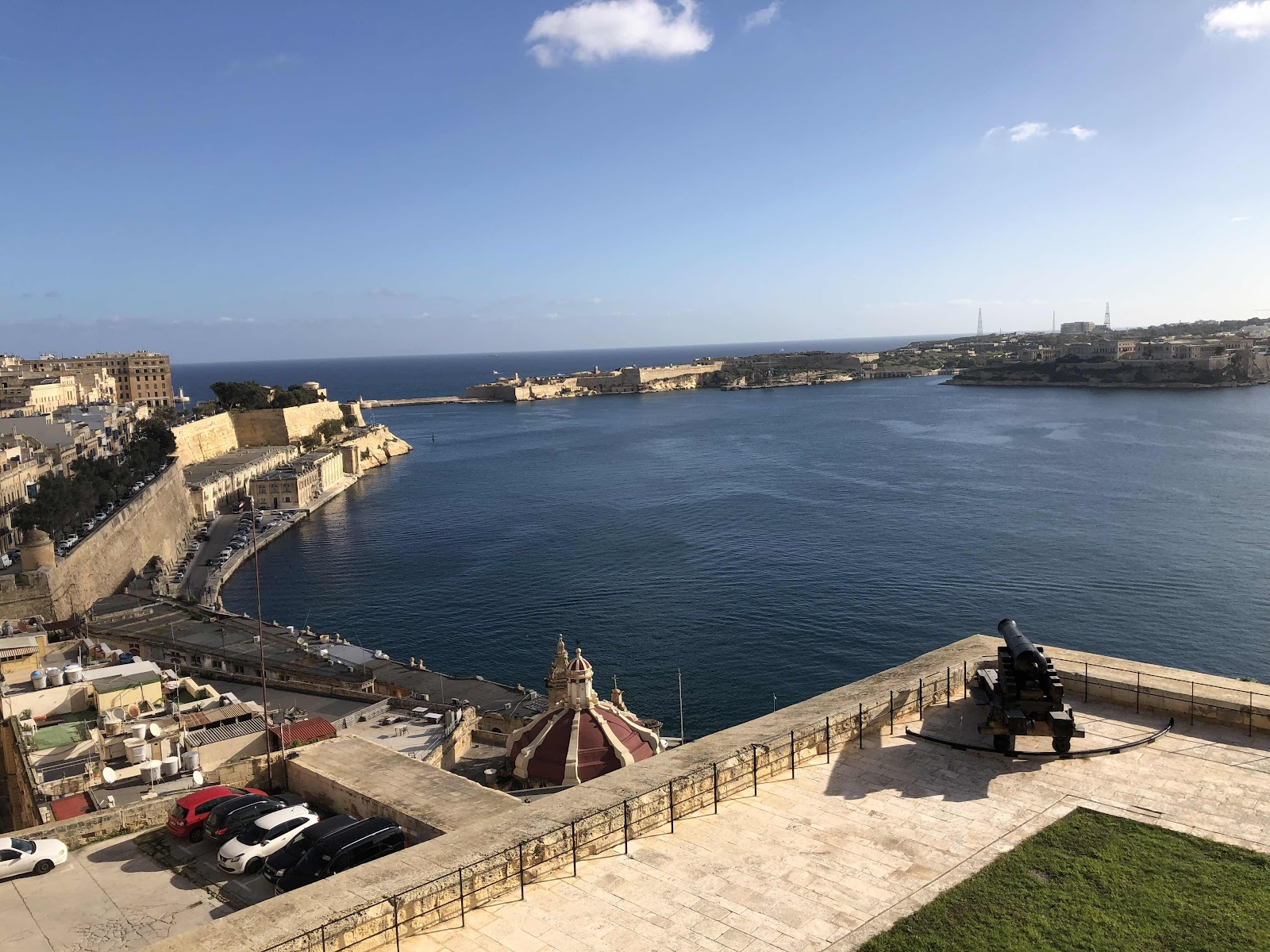 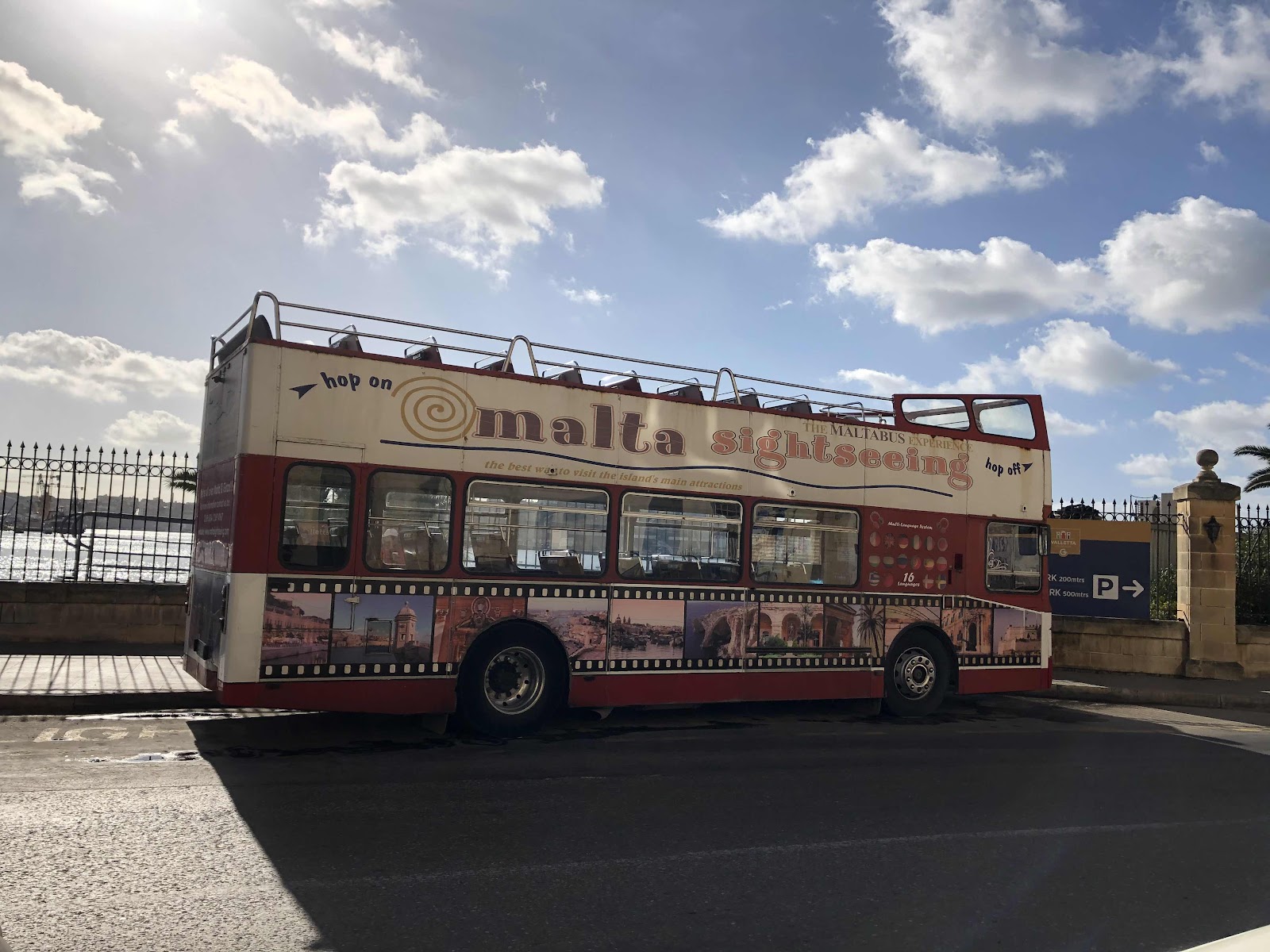 Hop on hop off bus 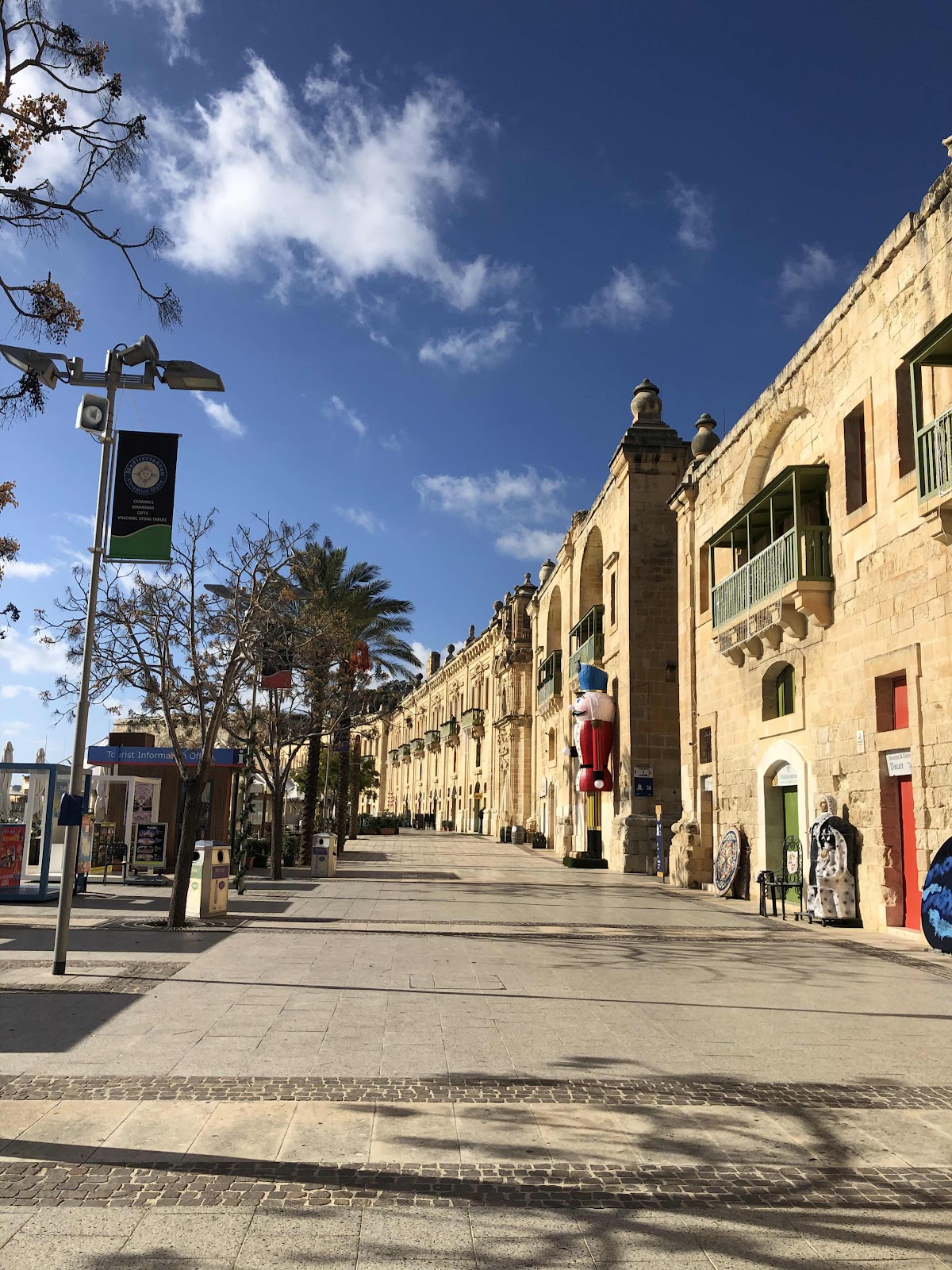 
Shopping:
Fridge magnets are cheaper in Valletta than in Gozo. There was Thanksgiving sale running across all the shops when I visited. So I got a lot of show pieces and souvenirs at a very good price from Valletta. Most shops were fixed price shops and no scope of bargaining.

Food:
I loved the food in Malta. I travelled France and Italy prior to Malta in my trip. But surprisingly found food to be the best here. Infact Pasta was much better here. Fully loaded English breakfast was available under 10 Euros!
Maltese cuisine is something which Indians are surely going to like as the spice quotient is more. 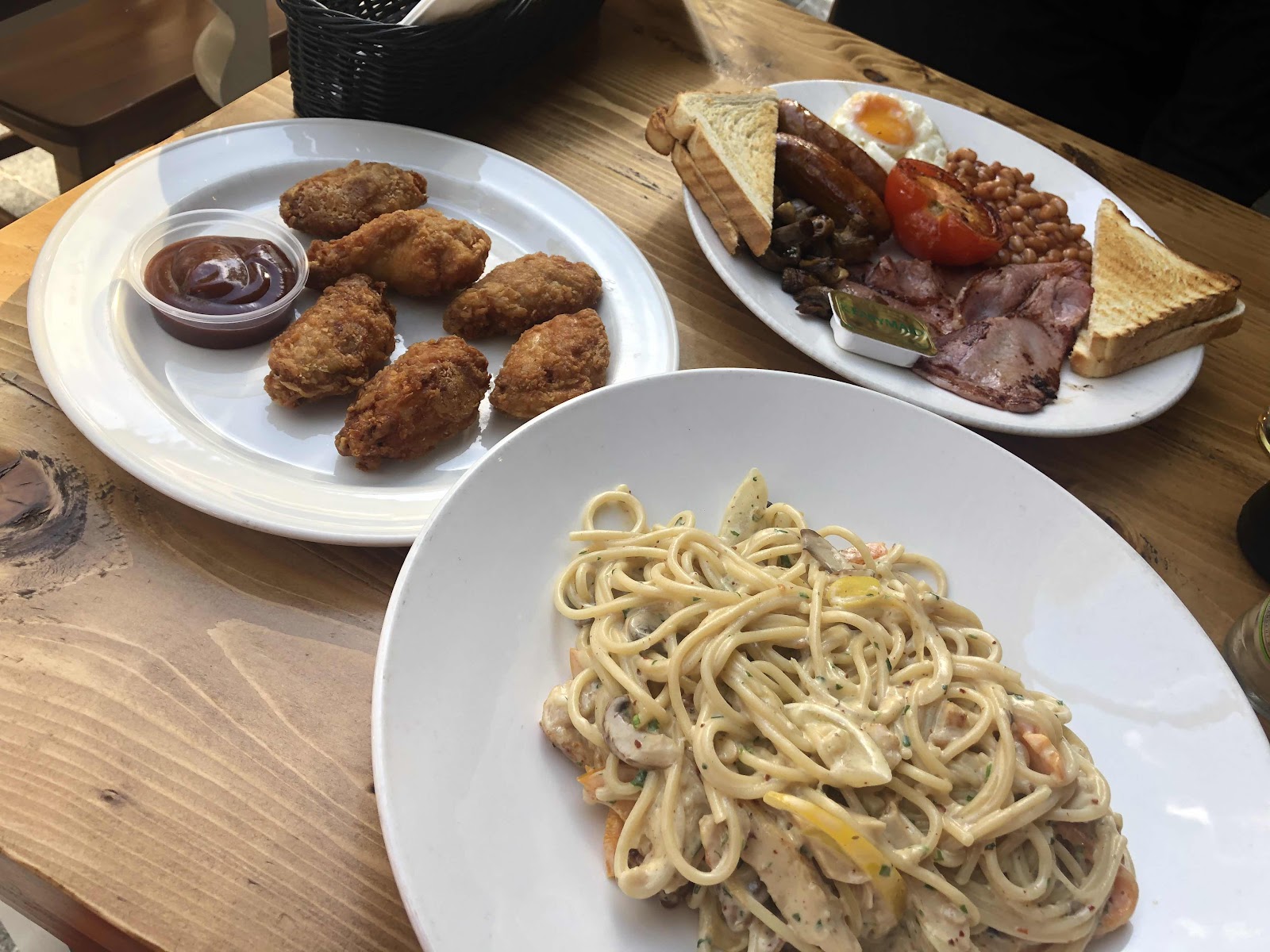 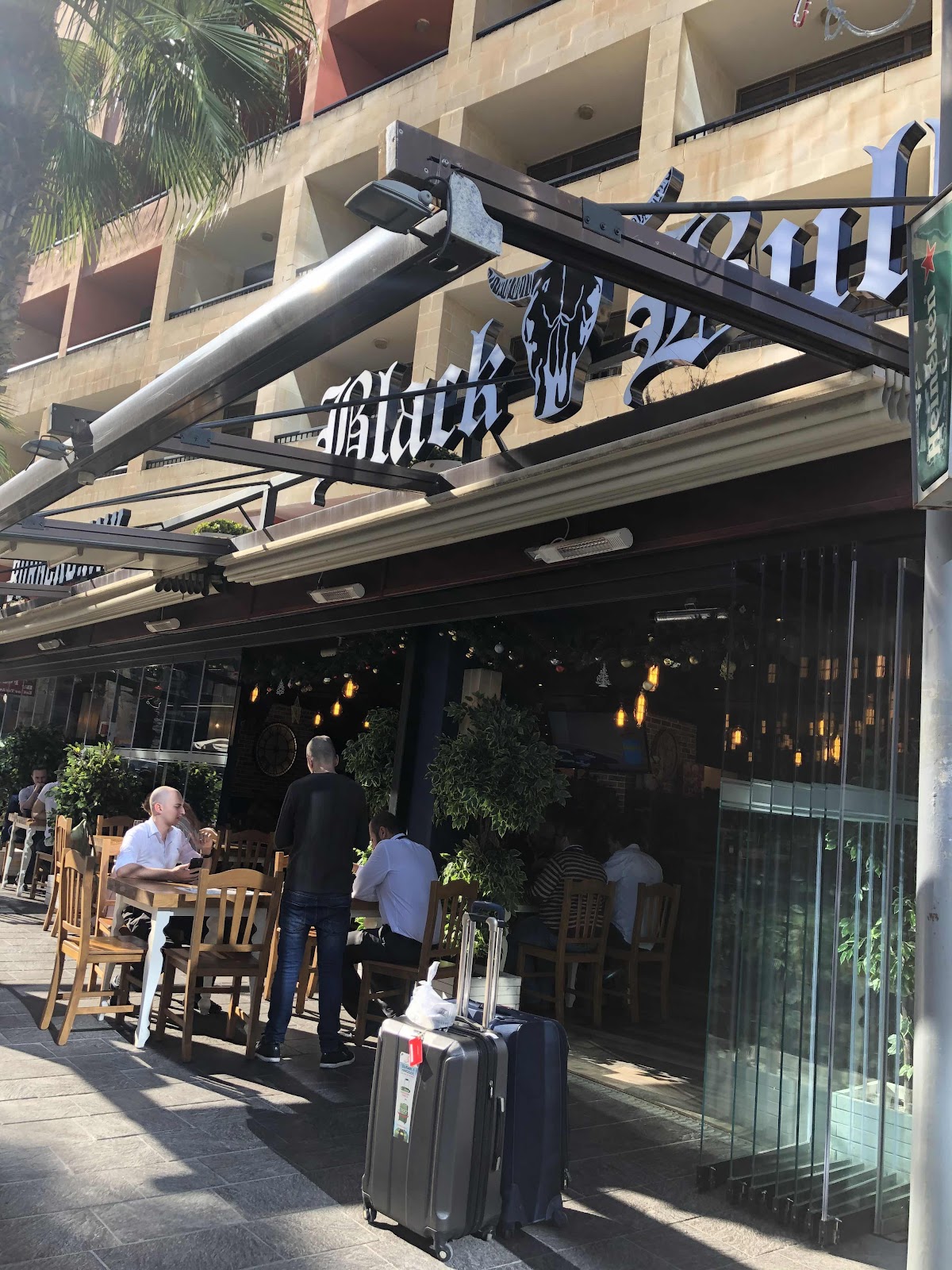 Some important links to consider for Malta Travel Plan:

I wish I had at least 1 more day to spend on this beautiful island country. My schedule was tight and I tried to make the most of it. But I can boast about touching all the important attractions in my trip in such a small time.
In a nutshell, Malta is a potpourri of beautiful landscapes, magnificent history and a bit of everything. Modern sophistications go hand-in-hand with pockets of prehistoric relics in a crazy mix of  Red  beaches, rocky coastlines, milky limestone cliffs and fantastic view of the Mediterranean sea. Wish to come here again on an idyllic and relaxed vacation next time 🙂